How The Rich Get Richer

What have the philosopher Pierre Bourdieu and the finance advice guru Robert Kiyosaki got in common?

They both know how and why some people accumulate wealth and others remain poor and struggle financially all their lives.

The key is the values parents teach their children, though both men have expressed this in different ways.

Bourdieu, a sociologist, tried to understand why people seemed to stay within their social class and rarely ever leave it. He concluded that it didn’t have much to do with the amount of cash that was readily available; instead he argued that there were different types of capital.

Educational capital, for example, was the sum total of knowledge and training a person received, which gave more educated people broader horizons and less educated people a more limited outlook. However, in terms of accumulating wealth, the most important capital that parents passed down was ‘cultural capital’.

This is the sum total of outlooks, attitudes and values towards everything in life, including the vexed issue of making, saving and investing money. Bourdieu said that this explained inequality; there was an inequality of ideas, beliefs and values being passed on to subsequent generations.

Some people instinctively know how to be sensible with money and how to acquire more of it, where others struggle. 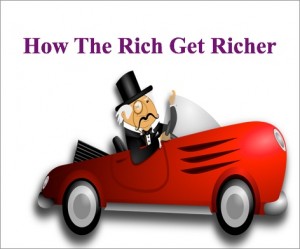 Kiyosaki, in a less academic but more practical way has argued the same thing and has a loyal following of fans around the world.

He believes that sound financial planning is something that is passed from ‘rich dads’ to their children (along, presumably, with their wealth) and poor money advice is also passed on.

Kiyosaki has argued that in order to be wealthy money should be spent on assets, as opposed to luxuries. The bigger portfolio of shares, bonds, property and other investments a person can acquire, the sooner they will enjoy a life of leisure and abundance.

There is an important relevance to these ideas in the 21st Century, as the gap between rich and poor has widened in the past decade more rapidly than at any other time since the 19th Century. More people than ever before are looking for advice and guidance on how to invest their wealth and how to protect it.

The number of ‘gurus’ offering help and insights has dramatically multiplied with the advent of social media, meaning that finding advice has never been easier, but sourcing quality advice grows harder and harder.

Finding an adviser who can give reliable, expert and unbiased advice is more difficult, as the number of ‘experts’ grows. Ultimately you need someone who has more to offer than well meaning platitudes and statements that start with the words ‘I was like you once…’

Getting on the Sunday Times Rich List might not be a possibility for all of us, but becoming better off by following tried and tested investment planning is possible for anyone. It must of course be stated that there is no such thing as a get rich quick scheme and the value of investments can go down as well as up, meaning that if you invest, you might not get out what you put in.

This is why sound advice on financial planning is so eagerly sought, as investors seek to limit the risks and maximise the potential gains.